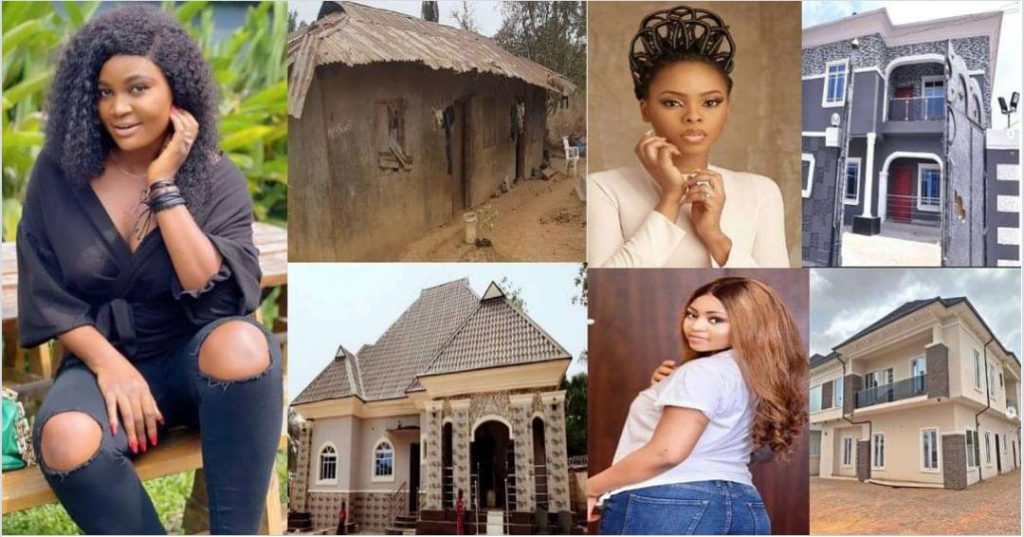 The joy of every parent is to see their child succeed and remember them even as they prosper.

Without further ado, we’ll be seeing 6 Nigerian female celebrities who have built beautiful houses for their parents. The beautiful nollywood screen diva via an instagram post she once shared, revealed that she has fulfilled her childhood dream of building her parents a house in the village.

The Asaba based nollywood star in that post, recounted how that she starved herself of the good life which prompted people to call her an “mbeke” (local girl) not knowing that she was saving to fulfil her childhood dream of building her parents a house.

She further revealed that the bungalow has a parlour, a kitchen, 2 toilets, 4 masters bedroom and a dinning.

2. Regina DanielsThe young nollywood actress who is now a wife to popular billionaire businessman, Ned Nwoko is one of the female celebrities who built houses for their parents.

In March of 2019, the nollywood actress shared pictures of the house she got her mother, Mrs Rita Daniels.

Regina didn’t disclose the location of the house but the house is definitely beautiful.

See pictures of both Regina and the house below; Nigeria’s super falcon and Barcelona skipper, Asisat Oshoala is one lady that truly knows how to show appreciation.

Asisat got the house for her parents while she was still playing in the chinese league for the Dalian Quanjian football club.

She shared pictures of the house she got her parents on instagram with the caption, ” small girl, big God?? Alhamdulillah, Parents first”

She further reiterated her “parents first” principle on her insta stories where shared a very powerful message by admonishing her followers to take good care of their parents first before anyone. Asisat Oshoala is wise, aside winning in football, she is winning family wise also.

See pictures of both herself and the house she got her parents below; 4. Chidinma EkileChidinma Ekile needs to introduction as the beautiful songstress is one of the most popular female musician in Nigeria. When her mum, Mrs Martha Ekile turned 60, Chidinma via an instagram post shared pictures of the house she got her mother in celebration of her 60th birthday.

In that post, while she thanked her mum for all she has done for them, she also called her mum her strength and her shield. 5. Francisca OrdegaThe super falcon star via a twitter post shared pictures of the house she got her mother. While she congratulated and professed love to her mum, the super falcons star hinted at herself getting married after building her mum a house.

See a picture of both herself and the house she got her mother below; For her mother’ s birthday celebration, the Nollywood actress built a house and presented it to her mother, in which she thanked her mother for all of her support over the years. She recalled how her mother took her to a film location when she was young and stayed with her throughout to ensure she was okay.

Which among these houses do you think is finer? Please