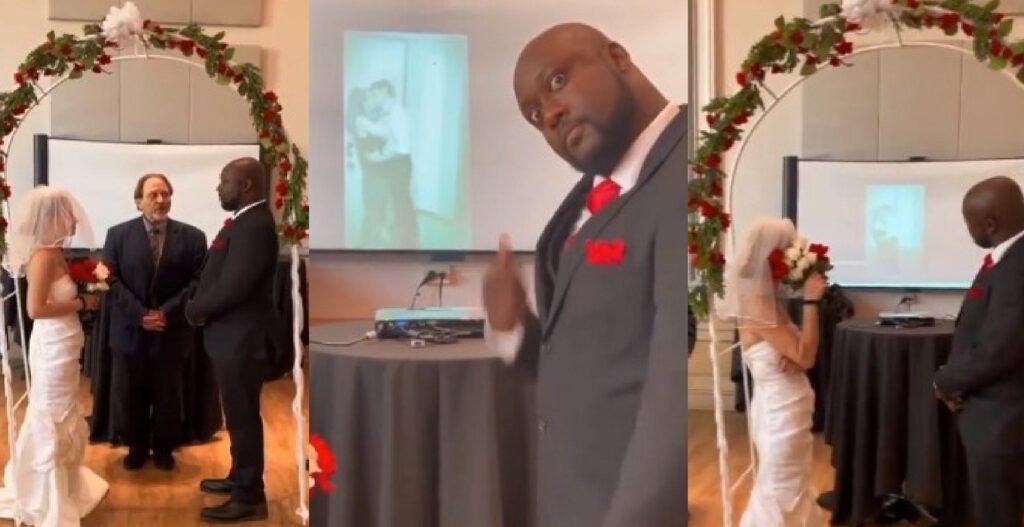 A video making the rounds online has captured moment a bridegroom scattered his own wedding when a pastor of the occasion made an announcement.

The groom played a video of his wife-to-be cheating on him as she was spotted allowing another man into her house.

The couple was about to say their wedding vows when the pastor asked if anyone had an objection.

Surprisingly, the groom raised his hand, and everyone wondered what he had to say.

The groom faced his woman and told her how much he loved her. He revealed that he had something in mind to tell her but didn’t know how to say it.

According to him, he decided to show her everything in a video on their wedding day.

After speaking to the bride, he brought a remote and played a video via a projector facing the guests.

The video captured the lady locking lips with another man, left everyone in shock. The bride felt ashamed as she covered her face with flower bouquet. Social media users expressed their thoughts as they took to comment section. Some reactions are shown below:

ajeps02 said, ‘This is what I can do without regretting anything thing 👏👏👏. God bless you my Man. At least she won’t be able to play the victim card, no one would dare talk anything bad about this man..😂😂😂😂”.

iam90billionpounds said, “95% of naija women are involved in this kind of infidelity😂”.

equitablenicholas said, “Na Dem Sabi they should shaa pay balance of event planner and the caterer 😂😂😂😂”.

comradeokafor said, “All women do it . just get married , forget searching, you will see”.