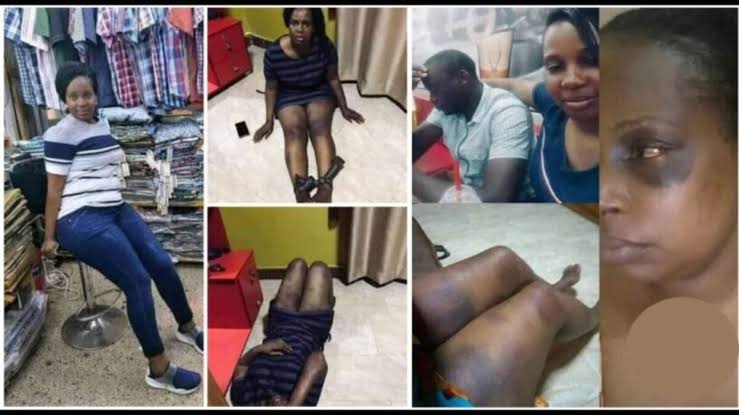 The shop operates from MM Plaza in Kampala city center in Uganda.

Martin Juuko reportedly tied up his wife, beat her up and and tortured her in the cruelest way possible after catching her redhanded cheating on him with one of the men.

Martin Juuko filled with anger, beat up his wife brutally before arrogantly posting her photos with injuries on his Facebook wall.

According to Juuko, he accuses the mother of his three kids, Brenda Namuyomba of turning his shop (Praise Shop) in MM Plaza into ‘a brothel’ where she changes men and invites them over just to have a good time with her sexually.

“My dear customers of Praise shop of Juuko Martin at MM Plaza, I’m sorry I decided to close the shop shortly because my woman Brenda Namuyomba had turned it as her prostitution office while she is my wife, My woman has turned into a prostitute. She removes the knickers I bought her for another man.” Juuko wrote on his Facebook.

“She gets everything. I give her money in dollars, I even bought her a car, I fly her abroad frequently, I gave her a bungalow in Munyonyo, but she still cheats on me. What even hurts me most is that she sleeps with my friends as well,” Juuko added.

Social media users are sharply divided over whether what he did was justified or not. Many condemned his actions as disgraceful, disrespectful and cruel. Ugandan security agencies are yet to take action on him.