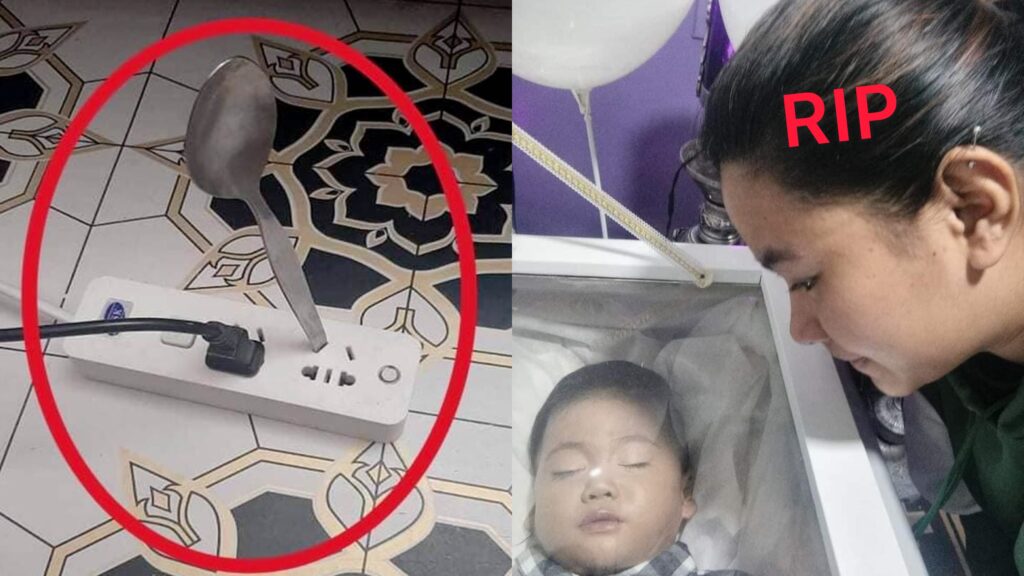 Electric shock is an unusual accident, but not uncommon for children. To prevent children from being electrocuted, most parents should equip plugs for electrical outlets and keep electrical cords and devices out of their children’s reach.

However, recently the Quezon City, Philippines news bulletin just reported a heartbreaking electrocution-related incident. It was a boy named Jake Angara (2 years old) who died after sticking a metal spoon in the socket.

In the interview, the boy’s mother, Eloisa Angara, said that this incident happened last Friday (February 19th). That day she made Jake a glass of milk and used a metal spoon to stir the milk for her baby. Before Eloisa gave her son a glass of milk, she carefully set the spoon in a high place out of Jake’s reach. Somehow, however, the boy got up, got the spoon and plugged it directly into the socket next to it.

Eloisa also announced that as she went into the living room, she saw her son lying motionless on the floor with a black burn on his chest while his hand was still holding the metal spoon that was plugged into the socket. Eloisa and her husband rushed to the emergency hospital, but the doctor said it was too late. The boy was pronounced dead.

“It’s hard to accept Jake’s death. I can’t believe I lost my baby. Jake has left us with so many wonderful memories. I hope you will live happily ever after in heaven.”said Eloisa.

Children, especially young children, are very curious. Babies are often exposed to electric shock, especially if they bite the power cord or plug a metal object such as a forks, knife, spoon, or finger into an electrical outlet. It is therefore the responsibility of parents to protect their children from electrical appliances and electrical outlets.