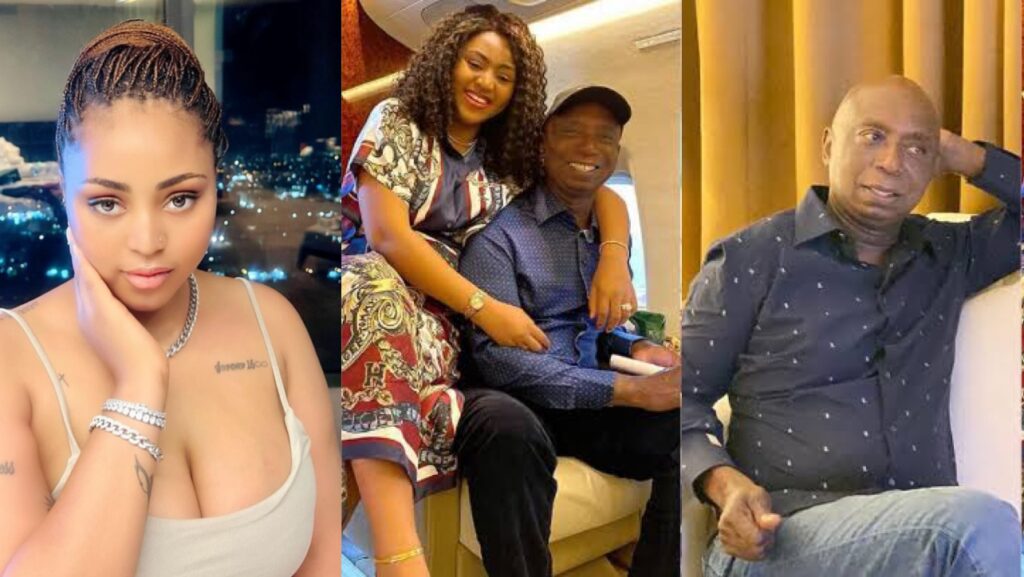 What kind of love will nest a 59 year old man with a 20 year old woman? Well that is one question that has been agitating the minds of many, following the marriage between Nollywood actress Regina Daniels and billionaire businessman, Ned Nwoko.

A recent interview by Nwoko and Regina has since cleared many grey areas,

Nollywood actress, Regina Daniels and Ned Nwoko’s marriage has been a subject of widespread debate with observers accusing her of marrying her older partner for his money.

The young star would tell her critics to see her as an adult after recently getting married to the 59-year-old billionaire businessman and politician, in Delta State. The screen diva had promised to grant fresh interview on her relationship status. This, she finally did this week.

The marriage to the former House of Reps member, Ned, no doubt remained a thing of public attention. Even though there is a major age disparity between Regina and her husband, Ned, the two have never been shy to publicly show their affection. Regina isn’t one to shy away on social media; hence it wasn’t long before she initiated her husband into the fierce world of celebrities where nothing is hidden.

“Actually some people thought that I met her through her mother or someone. No. We met, fell in love and we got married within three weeks,’’ he said.  Regina on her part, said she doesn’t think she could have married anyone within her age bracket because she is quite a stubborn person. She revealed that when she made up her mind to marry Ned, she was more worried about wwhat  her family members would say and not what Nigerians had to say.

“The only thing I was worried about then was how we are going to tell my family. I didn’t think about outside or anything; it was just my family. I don’t think I would have married somebody of my age because I am quite stubborn, very, very stubborn. My head is not down,’’ she said.

The actress, who celebrated her birthday last week, revealed that she calls her husband ‘’Baby’’.  Responding to her swiftly, Ned said, “I am actually the youngest baby in town.” Regina also stated that her hubby had barred her from cooking and was always complaining whenever he sees her in the kitchen.

According to the actress, reported to be in her early 20s, whenever she tries to cook, her husband gets angry, reminding her that they have chefs. “I cooked but he has stopped me, I cannot enter the kitchen, If  I enter the kitchen he’ll say stupid girl why are you cooking, you have cook”. Ned justified why he doesn’t allow her to cook, adding, “but I need her time for other things.”

The politician married the actress as his 6th wife which sparked conversation about the age gap between them. Regardless, the lovers are living their best life. A few other guests at the table, including Toyin Lawani, who was also at the dinner, lends support to Regina saying age difference between a couple doesn’t matter as long as they are both happy

She further said she could testify to the obvious happiness and joy between Ned and Regina. One of the revelations at the birthday dinner was that Ned is a great swimmer. Regina wanted the pool left opened just before the dinner started and Ned was quick to celebrate how he taught his ‘baby’ to swim. He narrated how he taught Regina how to swim in just 20 minutes and how he had taught 700 people how to swim in the last four years. “I taught Regina how to swim. I love sports, I swim very well and I love to teach two or three people at a time. I have taught over 700 people how to swim over the past four years,” Nwoko said. Corroborating her husband, Regina said, “He taught me how to swim. He is a very good swimmer and I learned in 20 minutes. He started by pushing me into the pool and while I was trying not to drown, he kept on saying swim girl, swim.”

Regina Daniels became a popular face in Nollywood after she featured in ‘Dumebi goes to school’ alongside star actress, Mercy Johnson Okojie. She played the role of Dumebi’s best friend. Regina has gone ahead to feature in a good number movies and acted opposite several Nollywood stars. The last couple of days have seen the couple together in a show of affection. Regina Daniels walked down the aisle with the wealthy lawyer in a traditional ceremony  few months ago.

The traditional wedding ceremony took place on Sunday, May 26, 2019, in Aniocha Local Government Area, Delta State with celebrities in attendance. That was after a traditional introduction ceremony held quietly in Regina Daniels’ family compound in Asaba, Delta State. The news was quite rife then that the young movie star and her billionaire businessman had secretly tied the knot

As it seemed, not a few had doubted the veracity of the gist of Regina’s romance with Ned. It became a very big issue of public interest early in April after the news of their marriage circulated further. Both Regina and Ned did not deny the rumour even as it dominated the blogosphere and social media space. There was further confirmation with Regina seen displaying opulence nestled in expensive cars, wristwatches and mansions and being flown in a private jet. On few occasions, she was spotted cruising around Abuja in a red Ferrari. Late in March 2019, Regina set tongues wagging after she showed off a Rolex wristwatch she bought for over N3 million. In the same month, the ‘Dumebi in School’ actress shared pictures of a house she bought for her mother and two Mercedez Benz cars she acquired. She had earlier flaunted a new Brabus G Wagon, all supposedly courtesy of the billionaire.

One could then imagine the reaction that greeted keen observers and their followers seeing pictures of the “couple” trend online when they stepped out for the first time at an event. The two had attended a convocation ceremony where Ned was awarded an honourary doctorate degree by the Federal University of Petroleum Resources (FUPRE), Effurun, Warri Delta State. That public appearance put paid to the rumours of the marriage.