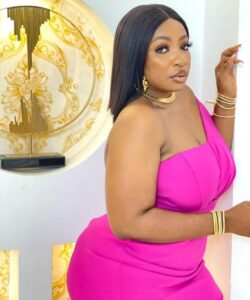 Nollywood actress, Anita Joseph has slammed those mocking her for not being pregnant yet, 16 months after she officially tied the knots with Fisayo Michael, a Nigerian hype man popularly known as MC Fish.

The Anambra State script interpreter described such people who put pressure on married celebrities and other individuals to get pregnant as being silly.

She said,“I am always in high spirits but I have also had to fight some private battles. I don’t even know how to put some of the things I have experienced in words. It is funny that people come to my social media page to ask me why I am not pregnant. People have said many unprintable things and I find them very naughty and silly. People that make those kinds of comments are just low lives. Some would even ask if my husband does not have sperm. However, I handle it well by ignoring them. I believe that if one is well mannered and has proper upbringing, t. are some statements one would not make on social media. Words are very sensitive, so I have built an armour around myself. I have always said that marriage is beautiful and I am a testimony to that.”