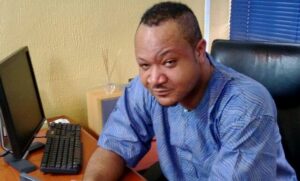 A step-sister of late Nollywood actor, Muna Obiekwe, has revealed that the actor’s kidney failure was triggered by high blood pressure.

Muna died about 4:30pm on January 18 at a​ ​hospital in Festac, Lagos, after he collapsed and was rushed there.

He died of kidney failure and was buried February 3 at Umudioka in Anambra State.

Chinwe Obiekwe, who spoke to Inside Nollywood shortly after the funeral, said Muna’s sickness started in October 2014. She disclosed ​that ​his two kidneys had failed, making it difficult for a transplant.

“It wasn’t a normal kidney failure,” she said. “It was high blood pressure that prompted his kidney failure so it did not give us time to do the transplant because it was the two kidneys that failed.”

She said her uncles had wanted to return to Nigeria to facilitate the kidney transplant before the death of the actor.

She, however, stated​ that​ Muna had failed to take his medications for his blood pressure due to work.

“He was always on different locations so he didn’t have much time to drink his medicine properly,” Ms. Obiekwe told Inside Nollywood.

Chinwe said Muna refused to speak out on his kidney failure because “he is a private person. He is a man.”

She said that the family were able to pay for ​his medical bills and had not needed donations.

She slammed critics who blamed Muna for not disclosing his health status. She asked if the critics had asked about the welfare of the family since Muna passed on or contributed to the funeral.