If I cheat on my boyfriend, he has the right to beat me anyhow he likes – Nigerian lady (photos)

Trending Video of a Nigerian man was captured on camera while he was assaulting a lady said to be his girlfriend because she cheated on him.

The video caused a lot of reactions on social media with many arguing that the fact that the lady is an alleged cheat doesn’t justify his actions of assaulting her the way he did.

Well, a lady took many by surprise after she somewhat supported the guys action as she puts herself in the scenario of the two lovers.

According to this lady, if her boyfriend catches her cheating on him, then he has every right to deal with her severely and she says he can do this however he likes.

I can never cheat on my bf,if I should do mistakenly he has all the right to beat me anyhow he likes..as for the lady she got wat she deserved, That is discipline for you 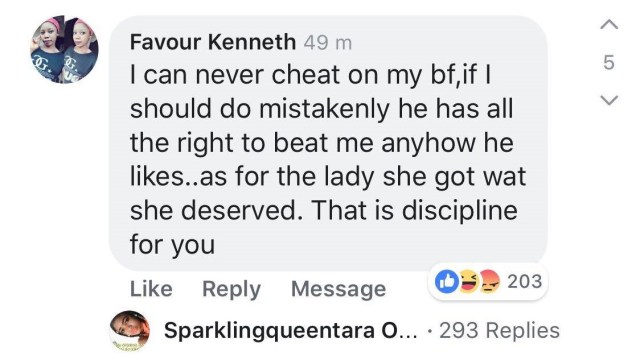